Can you get a developer job with no degree?

Web and app development is exciting – you probably tried that and got hooked, and who wouldn’t? Write some code and bam! – see the result immediately. Feels amazing, we all know that.

Naturally, a lot of aspiring devs wonder: wait, can I actually do what I love AND get paid for doing it? Can I become “a real developer” —- one that actually stands a chance of getting an interview & landing a job? Or maybe I need to take an expensive bootcamp or a course to just get started? Even worse, maybe I have to get a CS or Engineering degree to be even considered for a dev role?

This may feel like a massive hurdle, and even more so if your formal education isn’t specifically technical. But is there really just one way? Should you even bother trying to get a foot in the door with no formal credentials?

The world has changed

Let’s get one thing out of the way — CS degrees can be useful. There’s a tremendous benefit in having someone to present you with structured material and partly force you to learn (because let’s admit it, most of us need external reinforcements in form of parents/school/university/managers. We just do). But while teaching you all the O(n)-s, data structures and algorithms, a lot of formal courses lag behind the “curve”, failing to teach you the modern-day tech, like Cloud-based hosting infrastructure (AWS, Azure) and modern web/application development frameworks. It’s hard to blame them, though – this field changes like crazy.

Companies used to want CS graduates for their entry-level jobs, but there’s been quite a tectonic shift recently – fewer companies list formal qualifications as mandatory requirements, and some drop them altogether.

The proof is in the pudding

How about some hard evidence? Recently Google, Facebook and few more big-names said they are no longer going to require applicants to hold a degree. For every big company, there’s a host of smaller ones, also struggling to find people, and lots of good people just didn’t really bother to get a degree.

Don’t get me wrong, I am not trying to downplay the complexity of today’s software development, but most of the time the type of work we do is not exactly a rocket science – it’s applications that take data in, then and display it in some shape and form. It’s mostly good old CRUD. And yes, you do need to know quite a few things to build a usable, accessible, maintainable, scalable and performing app, but do you absolutely MUST have a degree? No way, Jose.

But let’s hear it from the fellow developers – are there any people who landed a job without, GASP!, having proper credentials? You bet there are.

Charlie Jeppsson, of hardcore finance/investment banking background, completed a bootcamp and landed a developer job at a startup.

Samantha Ming got her first developer job with no CS degree, after doing a coding bootcamp.

Most, if not all of these fine folks attended a dev/coding bootcamp of some sort (external reinforcement, duh!), but the point stays – you can get a job without a degree.

But I am told by employers I need to have a degree!

Sure, there’s still plenty of job openings where having a degree is listed as a requirement. And perhaps it’s justified in some instances. But there’s also plenty more roles where companies (big, medium and small!) adopt a much more flexible attitude. So, keep looking and keep asking (‘cause, naturally, good old asking around often works much better than sending your CV into the void and never hearing back from a recruiter).

See for yourself: according to Indeed.com, there are a whopping 58 thousand developer jobs in the US alone that don’t require a degree. That’s 44% of all dev jobs! 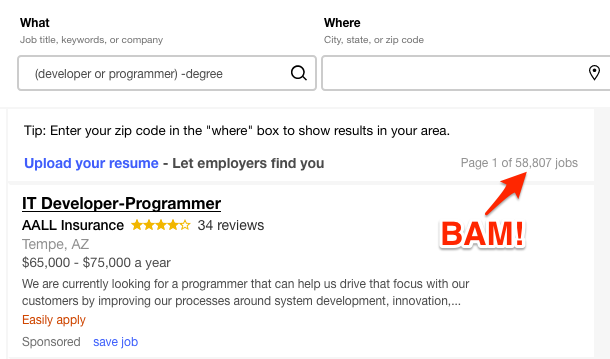 The ratio seems to be even better here, in Australia: out of 6899 dev jobs, 5700 don’t seem to need a degree. That’s flipping 82%! To put simply, for every job with a degree, there are 4 jobs without one! 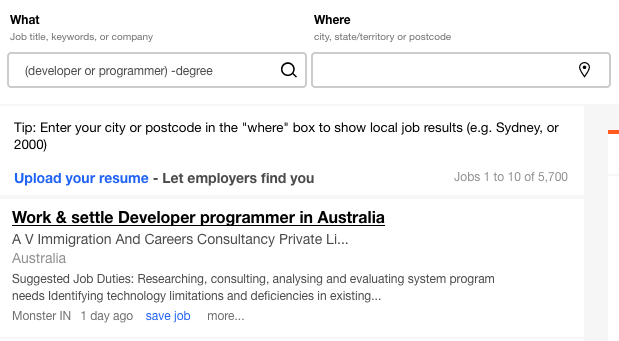 How to get ready

Does it mean you don’t need to learn, and you can just rock up and get hired? Not really. Or can you maybe learn on the job? You could, but with some caveats.

While you aren’t required to have a degree, there’s still quite a bit to learn: Database theory, SQL, Data modelling and structures, basics of sorting algorithms, basics of networking (‘cause duh! The Cloud!), a decent grasp on a popular programming language or two, how data flow from a client to server and back, basics of security, HTML and CSS and how to produce those in a scalable, responsive and accessible manner. The list goes on and seems to grow longer every year, with new tech being thrown into the mix.

But you can definitely learn the basics, acquire a foundation that’s sufficient to get a job, and then continue learning on that job.

To get started, check out this article where I list top resources to learn .NET Core:

Also, if you want to learn more about advancing your career as a developer and to receive handy tech tips, subscribe to my mailing list below. You can unsubscribe at any moment, no hard feelings!