Why I quit my job

You probably know the pattern. People say to themselves: "Boy I hate my work. I so want to quit and never go back to this kind of stuff! I wish I could just do knitting or something". So you decide that you had enough of this shit. But then your cerebellum freaks out. You may even hear his adult voice saying: "Hold it right there young man. What do you think you're doing? You have bills to pay, family to feed and that fat mortgage which makes your bank happy".

So you stay. Go have a nervous breakdown or two. I did. Then maybe find a new job that doesn't suck as much. It can be even awesome and inspiring for some time. But bad things start creeping in. You try to change some. Try to adapt to some. Neither really works. So you start hating it again. And you quit and find a new one. And it goes round and round.

Maybe it's just me who's broken. And most people are fine. Working away happily for years at the same place. Advancing their careers. Reaching the goals and stretch targets. Getting their bonuses. There's something funny about bonuses. I got mine this year and it was around 4k. Guess what - I couldn't care less. I tried very hard to find any happiness inside. Zilch. Nada. None. I mean bonuses are kind of useful, right? Cash and all of that. But did it make me a tiny iota happier? It did not. Same thing at previous place - to get a bonus you had to "perform" well. Knowing that my "performance" is linked to size of the bonus actually made me so unmotivated to go that "extra mile". Not to mention a shit load of politics in the "performance assessment" process. I'll write a separate post on that someday.

I tried changing things. Maybe the environment is boring I thought. So I went from being a devoted platform X developer to a completely different platform Y developer. I got bored second week into it. Luckily I realised that was the concept of work I hated. The whole nine-to-five year-in year-out employment thing. There was no point anymore in changing jobs. Why would you move home if your town sucks? Or the whole country? Just leave it altogether already.

It could've been our son who pushed me over the edge. Valentine is 3 years old, and kids are raw bundles of energy at that age. No social restraints. No doublethink. Lots of things broken or taken apart. He is totally cool and natural this way. Honest and open to the world around him. And he questions everything.

He asked me once: "where is your childhood?", probably meaning where is it geographically. I looked inside and had this sinking feeling that it was gone. Completely and irrevocably. I panicked. Maybe that was the proverbial moment when you realise that you are an adult. No more running around just for the sake of it. You have work to do. A family to support. Bills to pay. Child to take care of. No more fun for you.

That realisation opened the floodgates. I was completely overwhelmed. Like I lost something. Something really valuable was gone and there was no way to get it back. And I couldn't tell when I lost it. Whenever I thought of this I cried. When putting our son to sleep. Or on a train. Or at work. Now when writing this.

But you can't cry all the time you know. So I just went about my business. Day in day out. Work is boring but so what. When it gets especially dull I just distract myself with a healthy dose of twitter or news. Unsurprisingly the distraction part of work hours grew larger.

I don't think I've fully grokked the whole work-procrastination thing until I started reading "The now habit" by Niel Fiore. He suggests that procrastination is just an adaptation mechanism. A way of coping with stress and boredom. Shit gets dull - you tune out. Go read some internets. After some time guilt kicks in and you get back to work. Only to tune out again later.

So after a week or so of working on a specifically dull and stupid project I decided that I had enough. I arranged a meeting with my manager and told him I was quitting. 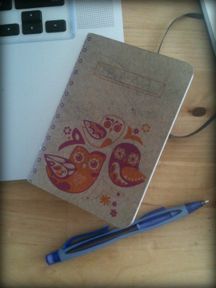 It was the most awesome day I had in years. I was so happy. Just walked the streets and smiled to everything and everyone: sun, trees, trams, dogs and people. It was awesome and also freaky. Imagine that you are at work and people talk work things. And every second this world moves further away. Sounds get tuned down. Facts becomes less important. Picture shrinks - like when a camera moves away from a scene. It's freaky because now you're on your own. No more salary. Savings are going to take you only so far. And before they're gone you need to figure out something new.

I am extremely happy and excited right now. And freaked out a bit as well. It is all new territory to me. Not sure what exactly I am going to do. Maybe freelancing. Or maybe start working on a new product - a mobile app or a website. Heck, I may even do something totally different - like joining an auto repair shop! It is such an awesome feeling - being at a crossroads. This fresh air of opportunity is well worth all the fear, uncertainty and doubt.

One funny thing happened as well. I never had heaps of ideas. It even used to bother me. I would get invited to join some of my friends' startups. And then I would tell myself - "Boy these are brilliant ideas! I wish I came up with them!" Somehow I started having more ideas now. Every day new ones keep pouring in: physical things to build, blog posts to write, apps to develop, things to learn.

Most importantly it feels like I am a kid again. World is huge and mysterious. There's so much to learn and explore. I don't know where I am going end up. But I do hope to never stop dreaming again.